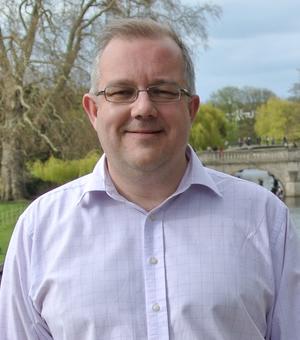 Richard Earl is the Ben Delo Fellow of Mathematics at Worcester College and, until 2022, was Director of Undergraduate Studies in the Mathematical Institute. He studied for a BA and DPhil in Mathematics at Queen’s College, Oxford from 1988-1995.

He has always been a keen supporter of mathematical outreach and in 2003 became the Schools Liaison Officer and Admissions Coordinator in the Mathematical Institute. During this time, he started the Undergraduate Ambassadors Scheme in the department, whereby students could get experience teaching in local schools as part of their degree. His outreach activity has included Royal Institution Masterclasses, Sutton Trust and UNIQ summer schools, Oxbridge Student and Teacher Conferences and he currently organizes and teaches on the Opportunity Oxford scheme for the Mathematics, Statistics and Computer Science departments. He had previously run a similar bridging course for incoming undergraduates who had not had the opportunity to take Further Mathematics.

In college he has been the Tutor for Graduates and Tutor for Admissions, including two terms as a member of the Admissions Executive.

His writing aims to support students about to begin a mathematics degree or considering doing so. His first book Towards Higher Mathematics grew out of the above bridging course and aims to help students self-teach Further Mathematics topics and other extension material. More recently he has written two Very Short Introductions – on Topology and Mathematical Analysis – and a mathematical dictionary. He has been awarded several prizes from the university, division and OUSU for his teaching.